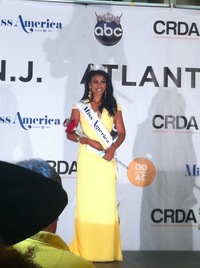 Throughout this week of Miss America Organization competition, Miss America 2014 Nina Davuluri displayed her commitment to diversity. Performing a classical Bollywood fusion dance for her talent, Nina swept judges away and engaged the entire audience. Nina was asked during preliminary competitions how she would have Americas embrace diversity. She said the solution goes beyond opening the discussion to practicing "cultural competency." By "engaging in other cultures" through food, dance, and language, Nina said cultural barriers will break down.

Even as she waited to hear her name called with first runner up Miss California 2013 Crystal Lee, Nina said, "We are making history standing here as Asian Americans."

Nina will certainly go down in history as the first Miss America crowned after the organization's homecoming to Atlantic City, New Jersey, this year. She is also the second Miss New York in a row to be crowned—Miss America 2013 Mallory Hagan preceded her. Along with her crown and new job title, Nina received a $50,000 scholarship. She begins her work first thing tomorrow in Seaside Heights, New Jersey, where she will help to rebuild, "as a symbol of hope and compassion. The Jersey Shore is our home."

Nina went to St. Joseph High School and graduated from the University of Michigan. Her scholastic and career amibitions are to attend medical school and become a physician. She was crowned Miss Syracuse before becoming Miss New York. She is twenty-four years old, and her hometown is Syracuse, New York.