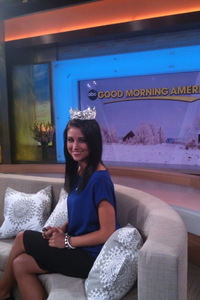 The newly crowned Laura Kaeppeler performed her first duty as Miss America by appearing on Good Morning America Tuesday. The former Miss Wisconsin flew directly from the pageant in Las Vegas, three suit cases in tow, to appear on the show.

Laura described the start of her year of service with enthusiasm.

"I couldn't be more thrilled," she says.

Laura also appeared on Fox & Friends Wednesday morning, and discussed her plans for the $50,000 scholarship awarded by Amway.

"I'm actually looking forward to going to law school after this year to really carry out the work of my platform of mentoring and advocating for children who have parents in prison...I hope to use it...to be a legal voice for children who don't have one," Laura says.

Laura rang the opening bell of NASDAQ this morning.