Local Teen Dedicates Platform to Sister and Children with Cancer 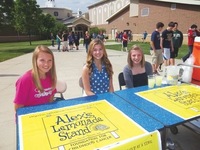 What do you do when life hands you lemons? If you’re fourteen-year-old Miss Fallen Timbers’ Outstanding Teen Shayla Thomas, you make lemonade—lots and lots of lemonade. Shayla’s platform, pediatric cancer, is near and dear to her heart. At seven years old, Shayla lost her only sibling, Christi, to cancer. Since then, she’s been working to raise money and awareness in every way possible. The popular lemonade stand fundraiser, in addition to others, has helped her raise more than $15,000 for a single foundation.

“I want to make others aware that kids get cancer, too,” Shayla said, “and that not enough money exists for researchers to find a cure for childhood cancers.

This is why Shayla organizes and mans lemonade stands in partnership with Alex’s Lemonade Stand Foundation. She notes that the organization, started by her sister’s friend and fellow cancer patient Alex Scott, “urges people to raise money for pediatric cancer research by holding lemonade stands.” Shayla organizes lemonade stand events at her school, and she sets up shop at local universities including Bowling Green State University and Heidelberg University. She’s also held lemonade stands in various high-traffic areas around town. “What’s important is to let people know you’ll be having a lemonade stand, before you have it,” Shayla said. She uses word of mouth and Facebook to spread the news and posts fliers to promote her events. A typical lemonade stand nets at least $500, she said. “It also helps if you have the stand at a big event where people already are. When they realize what it’s for, they are willing to give. They understand how important of an issue it is.”

For Shayla, childhood cancer is more than an issue. It affects her life every day, and she works nonstop toward a solution so others might be spared the hardships she endures. “I’ve lived it,” she said. “I have seen how much pain it causes the entire family, and it doesn’t go away; every day I miss my sister. I want to make sure other people don’t have to go through that. I feel like since this happened to me, I was chosen to speak up and chosen to fight for it, and I’m going to try to find a cure for cancer.”

Shayla’s platform isn’t just grabbing the attention of Ohio lemonade lovers. She’s receiving attention nationally. In the spring, Shayla was selected as the featured performer for the Solving Kids’ Cancer’s annual gala in New York City. The event raised $440,000 for childhood cancer. Shayla performed a contemporary ballet dance to Skyler Terry’s “Angel” and dedicated it in memory of her sister. “At first it was overwhelming to see how many people were there,” Shayla said. “But then, while I was dancing, during each move, I felt like I was talking to Christi and that she was there saying, ‘You’re doing what I wish I could be doing.’ … I knew she was with me.”

Shayla has big plans to expand her platform through large-scale events. She’s dreaming up ideas for a 5K “lemon run,” and she’s planning a formal ball for which ticket sales will benefit childhood cancer research—and of course, she promised, event attendees will be served lemonade.

Shayla is also involved in the Kids Cancer Crusade organization, founded in memory of her sister. With the money raised, the organization purchases comfy pajamas, books, games, other entertainment, and more for hospitalized children. Shayla helps shop for the items, which she personalizes by writing notes to those who’ll receive them.