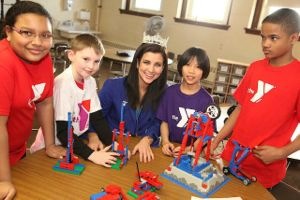 Miss America 2012 Laura Kaeppeler made a stop in Grand Rapids, Michigan, this week, where fourpoints writers and photographers escorted her around the city for the April/May cover story and photo shoot. Laura visited the Grand Rapids Montessori to speak at an assembly for fourth, fifth and sixth grade students, then she spent time with children in the school's afterschool program.

Students in the afterschool LOOP program showed Laura their LEGO projects that they made as part of the STEM–Science, Technology, Engineering and Math–curriculum. The Miss America Organization is focusing on enhancing awareness of educational programs like STEM, especially for girls, this year.

“Miss America, as we know, is a scholarship organization, but it’s also an organization of female empowerment, and an organization that is encouraging young people to become involved in fields related to STEM,” Laura said.

Laura was in Michigan on Tuesday and Wednesday. She flew to New York Wednesday evening.

Don’t miss the next issue of fourpoints magazine with Miss America 2012 Laura Kaeppeler on the cover! Fourpoints is offering a special discount for this issue. Order 5 or more copies, and pay only $3 per issue* Order your extra copies today! Click here and use promo code: LAURA Not a current subscriber? Subscribe today!

*When five or more copies are ordered, pay only $3 per issue. Less than five copies will be at the standard rate of $5.50 per issue.