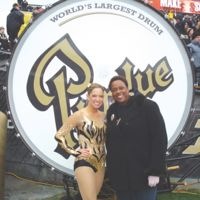 Jenee Johnson is working hard for Indiana's state pageant. This local director is positive and pro-active, and the success of the program is living proof.

Jenee is the kind of volunteer that every state wants. She isn't afraid to work hard, she truly believes in the value of the program, and she is dedicated to the success of others–whether they are her contestants or other volunteers.

Her volunteerism came through a friend who encouraged her to get involved, and the rest is history.

"I've always been aware of the pageant," says Jenee. "And even though I modeled for a while, I never got involved in competing. I finally became a volunteer when I was working at a gym. The gym wanted to offer the local contestants a prize package. Once I met the contestants and my friend urged me to volunteer, it was an easy decision."

She started out helping here and there and eventually became a local director of the Miss Three Rivers pageant. This is an open pageants, meaning contestants from all over Indiana can enter. There is also a Miss Three Rivers Festival pageant that is not associated with the Miss Indiana pageant.

"I was recently asked to become a board member of the Miss Three Rivers Festival pageant," says Jenee. "It's an honor to be elected to their board. We have talked about combing the festival and the pageant, but the connection was never there. Regardless, we love working with them."

Forging relationships is one of Jenee's strengths, and it has also strengthened her pageant. One unlikely but wonderful ally for her pageant is the local chapter of Sports Car Clubs of America. The local chapter contacted Jenee and asked if her titleholder would be interested in handing out trophies at one of their events. Jenee responded positively and suggested that she also sing the national anthem. That suggestion sparked a relationship that has grown.

"It turns out that no one had ever sung the national anthem at any of their events," says Jenee. "We went and ended up having such a good time that we went to the rest of their events for the rest of the year. And they had a representative attend our pageant and give the outgoing titleholder flowers during her final walk."

Volunteers like Jenee are the backbone of the Miss Indiana pageant and, on a larger scale, the Miss America Organization. She is one of the quiet heroes who is willing to give of her time, effort, and energy to an organization that she believes in.

Preliminary winners were named tonight in the first night of competition at the 2011 Miss Indiana Pageant in Zionsville, Indiana.

Preliminary Talent Winner was Miss Duneland, Jackie Jerlecki,  of Goshen. Jaclie is a graduate of Bowling Green University in Bowling Green, Ohio. She sang “Take Me to the World” from Morning Primrose.

Competition continues Thursday at 7:00 p.m. with two more Preliminary Winners named in Talent and Swimsuit. The Miss Indiana Pageant finals are Saturday, June 25, 2011. All competitions are at the Zionsville Performing Arts Center.  Tickets available at the Box Office and by calling Pat Farm at 574-527-7795. The new Miss Indiana will compete at the Miss America Pageant in January, 2012. For more information, go to www.missindianapageant.com.

Miss Indiana and Miss Indiana's Outstanding Teen are official state pageants of the Miss America Organization, one of the nation's leading achievement programs and the world's largest provider of scholarship assistance for young women. More information about Miss America can be found at www.missamerica.org.