Kansas Teen Raises CMN Funds One Penny at a Time 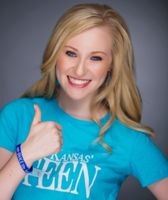 Stevie Mack, Miss Kansas’ Outstanding Teen, has dedicated her summer to raising funds for Children’s Miracle Network Hospitals (CMNH) and wanted to think of a few creative ideas to assist with her fundraising efforts. Each summer, Stevie spends one week at the Butler Showchoir Showcase at Butler Community College in El Dorado, Kansas. The camp hosts approximately four hundred high school campers, teachers, staff, and guest artists from all over the country.

Stevie used this opportunity as a way to raise funds for CMNH by having a Change War. The campers were divided into groups of about seventy students and were told each group would have a bucket with their group name placed on the front. Throughout the week they could place change in the buckets to gain positive points. If they wanted to use cash, they were able to place it in the bucket of a different group which would cause negative points–but the money would still go to CMNH.

All of the student groups, as well as the teacher’s group, participated in this fun initiative. By Friday evening, the buckets of change were counted, and the end result was about $500 in change raised to benefit Children’s Miracle Network Hospitals. Stevie, the camp staff, and student campers were thrilled with the results and incredibly proud they had raised $500 using only spare change!

One week after the Butler Showchoir Showcase, a staff member from the camp ran a similar camp through the Children’s Youth Theatre of Wichita. Fifty-three students helped raise $175 competing in a Change War. Those proceeds also went to CMNH through Stevie’s efforts. Altogether, Stevie has raised $6,242 this summer directly benefiting CMNH!

Stevie is entering her junior year at Trinity Academy in Wichita. Throughout her year as Miss Kansas’ Outstanding Teen, she will promote her platform of “Overcoming Adversity: em-BRACE the future.”