Four contestants were honored yesterday with these awards.

At Friday's Miss America press conference during Miss America Pageant week, this year's Quality of Life award winners and the winner for the first ever fourpoints Scholarship Award were announced.

This year's Quality of Life Award winner is Miss Michigan Katie Lynn LaRoche. Katie was recognized for her work on her platform, "Bringing Awareness to Human Trafficking" and she will receive a $6,000 scholarship. The announcement was made at Planet Hollywood Resort & Casino during Friday's Miss America press conference, and marks the last day of preliminary competition for the 2011 Miss America Pageant presented by DSW Designer Shoe Warehouse. 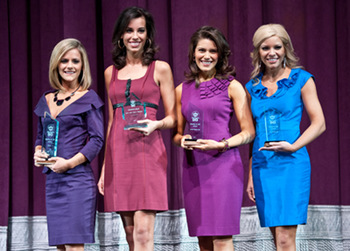 Katie has been blessed with the opportunity to found and serve as the President of the non-profit organization, One World, an anti-trafficking organization that follows the 3P Paradigm of the US Department of State: Prevent, Prosecute and Protect. Katie's organization works to prevent this crime by way of educating the public. In partnership with the Michigan Human Trafficking Task Force, the organization has the objective of improving state and federal policy and to ensure that the criminals of human trafficking are prosecuted. Katie's organization strives to protect the victims by funding necessary rehabilitative services and shelters.

The second runner-up is Miss New Jersey Ashleigh Udalovas, whose personal platform is "Read to Succeed: Improving America's Future Through Literacy." Ashleigh works with her local chapter of First Book - a national non-profit organization whose mission is to provide children with low-income families with the opportunity to own their first new book. As chair of her local chapter, she recruits new board members, initiates fundraising events, informs the public, interviews prospective recipient groups and grant funds. As chair, she has helped to grant over 2,000 books and over $2,000 in book grants to four schools and programs that serve as a population of at least 80% low income.

The Quality of Life Awards were introduced in 1988 to recognize contestants who excel in their commitment to community service. The awards are available to each of the 53 contestants competing for the title of Miss America. In order to be considered for the Quality of Life Award, contestants must have submitted an application describing their involvement with Children's Miracle Network, the national platform of the Miss America Organization, and their own personal platform issue.

The fourpoints Scholarship Award is a $2,000 award offered to all of the 53 contestants. Each of the contestants had to write an essay describing how THEY represent the Four Points of the Crown which are Service, Scholarship, Success and Style. The winner of this award is Miss District of Columbia Stephanie Williams.