Miss America 2011 Teresa Scanlan kicked off her year in NYC with national television interviews with the most popular morning shows in the country. Her first stop was an interview with Miss America 1989 Gretchen Carlson on FOX & Friends. You can watch the interview here! 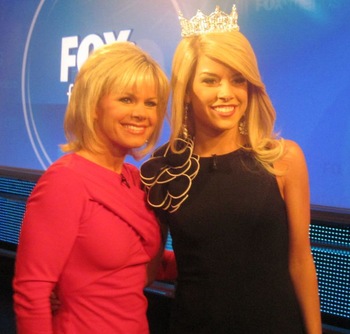 After FOX & Friends, Teresa was interviewed by 2011 national judge and Emmy Award winning, Joy Behar and fellow cast members on ABC's The View! You can watch the interview here! Following The View, Teresa did a brief interview with Inside Edition along with several interviews with media outlets from across the state of Nebraska, who were celebrating their first ever Miss America from the cornhusker state.

On Tuesday, Teresa started the morning by ringing the opening bell at NASDAQ with MAO Chairman, Sam Haskell along with members and independent business owners of our skincare and cosmetics sponsor, Artistry by Amway. Her appearance was featured on CNBC, KTVU, CNBC India, NDTV, Business News Network, CNBC.com, Itsaboutfinance.com and Fox Business Network. You can watch Teresa ring the opening bell here!

After NASDAQ, Teresa headed straight for an appearance on The Wendy Williams Show and then participated in more media interviews with her supporters in Nebraska.

Yesterday Teresa did a Sirius/XM radio tour and appeared on shows such as Broadminded, Morning Jolt, and Shade 45. She then taped an interview with Associated Press Television and taped a fun video that will be featured on AOL’s home page for “You’ve Got," which will air this weekend.

Teresa participated in a press conference with members from the Foreign Press this morning with representatives from around the globe and she is now being talked about internationally.  Later, she will join Artistry by Amway for interviews with health and beauty editors from top magazines that include Elle, Redbook, Self, Glamour and many other health and beauty publications.

It's been an incredible start for Miss America 2011 Teresa Scanlan, and she can't wait to see what the upcoming year will bring her! Congratulations Teresa - we are all so very proud of you!