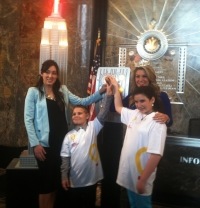 The New York City skyline shone in CMN Hospital colors from sunset the evening of Thursday, May 29, until 2 a.m. Friday, May 30, to help raise awareness for the urgent charitable need of children’s hospitals in New York and across North America.