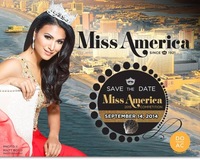 Miss America 2014 Nina Davuluri was present to share in the excitement of the announcement of the competition’s where she was the first Miss America crowned upon the organization’s historic return to Atlantic City in September 2013. Davuluri joined city officials for the date announcement as she made visits throughout the city, including a stop at Atlantic City High School to meet with students to encourage them to follow their dreams through a solid education. Davuluri plans to attend Medical School by using her Miss America Scholarship.

The Miss America Competitions return home in September and will be filled with wonderful city- wide events following the Labor Day weekend which will include three nights of Preliminary Competitions that will take place September 9th, 10th, and 11th at Atlantic City’s Boardwalk Hall. In addition, the much anticipated Miss America “Show Us Your Shoes Parade” will be held on the famed Atlantic City Boardwalk on Saturday, September 13th.

Sam Haskell stated, “We plan to proudly showcase the beauty of Atlantic City and Miss America together once again on ABC. The country embraced our return to our birthplace which was evident last September, with the best television ratings in over 9 years. Nearly 10 million viewers tuned in to see Nina Davuluri crowned as the first Miss America of Indian descent. We are excited as plans unfold for a new television event and we are so thrilled to build on the success of being home in Atlantic City!”

“The Governor’s team brought Miss America back to Atlantic City where it belongs, “said John Palmieri, CRDA Executive Director. “The power of the Miss America brand and its positive economic impacts have empowered us to promote Atlantic City’s appeal as a tourism destination, beyond gaming.”

The Atlantic City Alliance President Liza Cartmell stated, “Not only was Miss America a huge ratings hit, it was driver of enormous positive publicity for Atlantic City. Much of the media who covered Miss America equated the competition’s return to Atlantic City as one symbol of the city’s great comeback. It also effectively demonstrated that Atlantic City offers more than just gaming.”

Tickets for the 2015 Miss America Competition will go on sale in the Spring. Watch for the sale date by visiting the Miss America Organization’s website: www.missamerica.org or Miss America’s facebook page www.facebook.com/MissAmericaOrganization.

Last Year, CRDA finalized the multi-year agreement that brought Miss America back to Atlantic City. The CRDA and the ACA all played key roles in forging the agreement that will continue to spotlight and attract even more tourists from around the world to America’s premier gaming and vacation destination.