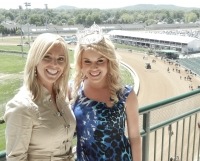 Miss America 2011 Teresa Scanlan spent the week in Louisville and was able to enjoy the blue skies and the blue grass of Kentucky for a very special Derby week! 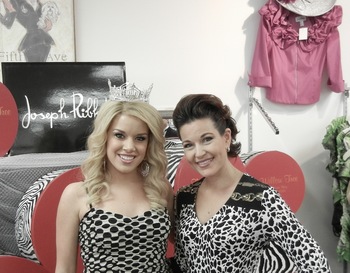 The week has been full of exciting activities and pre-derby events for Miss America, sponsored by Miss America's wardrobe provider, The Joseph Ribkoff Company.  Special highlights included Teresa working with the media, and visiting a special boutique, The Willow Tree, which features the Ribkoff Collection.  While Teresa was visiting with guests, she was greeted by a surprise guest, her Miss America sister, Heather French Henry, Miss America 2000, also dressed in style with Joseph Ribkoff!

Miss America, along with many other celebrities, was in town for a very special week that kicked off with the Derby Festival’s oldest tradition, the Pegasus Parade.   Mayor Greg Fischer greeted Teresa along with the grand marshals of the parade - four Congressional Medal of Honor recipients.  Heroic Adventures was the theme as thousands gathered on Broadway for the Republic Bank Pegasus Parade. Teresa joined TV stars like Raven Symone and Kate Gosselin, who shared the spotlight with distinguished military veterans on floats and inflatable parade icons. Over 275,000 fans lined the parade route and were thrilled to see Miss America! 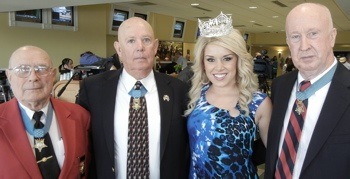 “It's so wonderful to celebrate our military and we are so very proud to salute these real-life heroes,” said Teresa. “It was an honor to meet the grand marshals, who are World War II veterans.”

The week was topped off with Teresa attending a celebrity luncheon on Thursday afternoon at the beloved Churchill Downs, steeped in deep tradition and history.  She mingled with stars and had an opportunity to enjoy the festivities that captured the spirit of this great tradition.

Teresa is now off to a whirlwind weekend with her next stop at the Youth Leadership Summit in Illinois followed by a Museum of Air and Space appearance in Omaha, Nebraska!