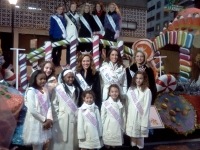 Catch up with Elizabeth Fechtel, MAOTeen 2012, after her week with Philadelphia, PA.

Miss America's Outstanding Teen 2012 Elizabeth Fechtel visited Philadelphia, PA last week as she prepared for the 6 ABC Dunkin' Donuts Thanksgiving Day Parade. In four short days, she was able to see a lot of sights, visited with many children, rehearsed, went to the Miss America Organization office to meet with their staff, caught a broadway show, caught up with some of her fellow contestants and of course performed in the parade.

Elizabeth's first stop on her week long tour was to the second grade class at William Penn Charter School. There she met with the classmates of one of the MAOTeen National Princesses, Alexis Melchiorre, and she talked with them about the various ways that you can give back to your community. 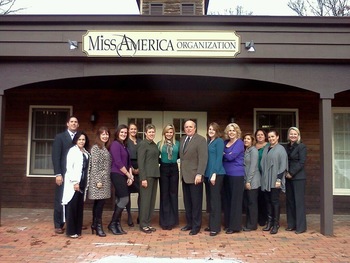 Miss America's Outstanding Teen then went to the Miss America Organization's office in Southern New Jersey. There she met with the staff, enjoyed a luncheon and even got to sneak a peak at the upcoming Miss America Competition Guide.

Tuesday, November 23rd was equally as busy for Miss America's Outstanding Teen 2012 as she performanced and visited with the children at two area schools, toured the Philadelphia Museum of Art and ended the evening taking in a show.

Elizabeth started the day at The Woods School where she performed and visited with the residents. The school serves people with exceptional needs at all stages of their lives. The residents there were prepped and ready for her visit. They asked a lot of great questions including "what is your favorite vegetable?"

In between school visits, Elizabeth was able to sneak in a very special tour of the Philadelphia Museum of Art. She was able to see some of the highlights and treasures of the museum. The Philadelphia Museum of Art is one of the largest museums in the United States. Its renowned collections, acclaimed special exhibitions, and enriching programs are viewed my visitors from around the world.

Elizabeth was then off to the US Dream Academy where she spoke about her platform S.E.R.V.E., performed, visited with the children and signed photo cards. The children were over the top to be able to see and meet her. The US Dream Academy is an after school and mentoring program who's overall goal is to nurture the whole child while altering attitudes, enhancing self-esteem, supporting emotional and intellectual growth, and sparking dreams.

Miss America's Outstanding Teen Elizabeth Fechtel spent Wednesday morning seeing some of the sights around town such as the Liberty Bell and the National Constitution Center. Then she spent the afternoon with a group of very special children at The Children's Hospital of Philadelphia (CHOP) as an ambassador of the Children's Miracle Network. Elizabeth did an arts and crafts project with them and signed photo cards for each child. 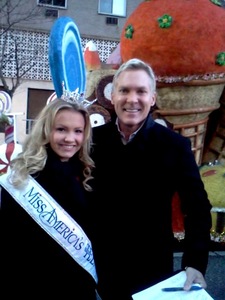 The Children's Hospital of Philadelphia was the nation's first hospital dedicated to the care of children. Since opening its doors in 1855, CHOP has been the birthplace of many dramatic firsts pediatric medicine that have helped to save countless children's lives.