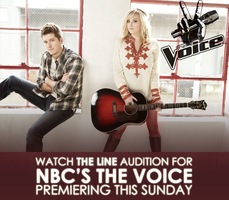 Hailey Steele, the former Miss South Dakota's Outstanding Teen 2005, and her band mate Leland Grant appeared on NBC's The Voice, and will compete for the this season's grand prize–a recording contract.

The duo performed Monday night in front of judges Christina Aguilera, Cee Lo Green, Blake Shelton and Adam Levine. Hailey's band, The LiNE, got together in November 2008, and it hopes to make it in the country music world. Watch The Voice Mondays at 9 p.m. Eastern.