Tickets Please! Sell Out Every Show 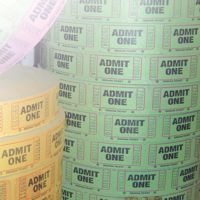 Sold out–two words that everyone in the show, from the producer to the performer, loves to see. Imagine looking out from behind the curtain during your pageant and seeing a sea of smiling, excited faces. It's a wonderful dream, but reality often doesn't match up. Bill Haggerty, co-executive director/executive producer for the New Hampshire Scholarship Program, and Michelle Metzger, executive director of the Miss Texas program, know the value of filling seats.

What is the value of ticket sales to scholarship programs?
Bill Haggerty: Ticket sales for the pageant are substantial for helping to support the program cost and the cost of the show–and for making a profit besides. The first thing you need to do is set a reasonable price for your tickets according to your demographics. The price they charge in another place may not be appropriate in your area.
Michelle Metzger: Ticket pricing has to be attractive for a family of four to attend the event. Also, implementing some revenue sharing arrangement with local charitable organizations can help incentivize them to sell tickets and attend themselves.
BH: I can't emphasize how important the contestants and their families are, especially with the advent of social media. Miss America kicked it off two years ago when they began to use online voting to put contestants into the top fifteen. That has opened more avenues for ticket sales.

What other new ideas are you using to increase ticket sales?
MM: One idea suggested by our host facility was to use local Girl Scout, Boy Scout, and charitable organizations to sell our tickets and allow them to keep a portion of the proceeds for themselves.
BH: One event that has been successful for us we modeled after media days at the Super Bowl. We invite the media to come to a rehearsal of the program. They don't see the entire show, or even finished sets and costumes because of how far it is ahead of the show, but they'll be able to see the opening act, along with another production number, for photos and video.

What are some of the more "traditional" strategies that you use?
BH: We try to get information to every weekly paper in our area. We also work with the local cable TV stations. Again, the local, smaller stations are more willing to work with you.
MM: In the past, we have relied on "pageant family" patrons for our tickets, and from my observation, we have sold a very small percentage to the general public. Also, sponsors were given tickets they may or may not use, and usually these were the best seats in the house. We plan to have sponsor tickets converted into vouchers that can be used to redeem at the box office then have the sponsors in a suite box above the main audience.