Laura Kaeppeler, Leaders in the Criminal Justice Field Recognize Impact of Incarceration on Families and Communities 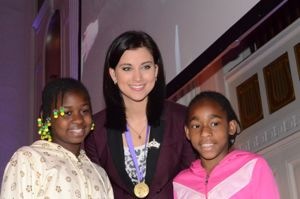 Miss America 2012 Laura Kaeppeler recently shared the impact of her father going to prison when she was a teenager with the Osborne Association, a nonprofit organization that serves more than seven thousand currently and formerly incarcerated individuals and their families each year, to give a voice to the 2.7 million children in the United States. with a parent in prison. The Osborne Association honored Laura with the Thomas Mott Osborne Medal at this record-breaking fundraising event, which hosted seven hundred attendees. Miss America helped the organization double their audience that night.

“Children of incarcerated parents are an invisible population, and tragically there is no one agency responsible for their welfare,” stated Laura in her platform statement after her crowning as Miss Wisconsin in 2011. “During that time, I experienced emotions of isolation and anger due to the vast publicity this situation was given in my home town. Because of this experience, it has become my mission in life to help children overcome this adversity while understanding they are not alone and must never give up on themselves.”

Laura spoke at the June breakfast hosted by the Osborne Association, an 80-year-old nonprofit organization that has pioneered programs that empower individuals with current or previous involvement in the criminal justice system to lead positive, healthy, and productive lives, and to deepen connections to their families and communities.  For the last thirty years, Osborne has also led a movement to address the well-being of the children and family members who are left behind after a loved one is incarcerated.  Click here for more information.