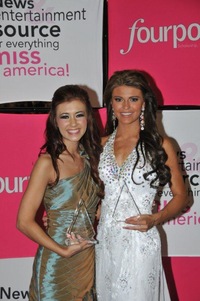 When teens graced the stage Thursday night for the final preliminary program, each step was in place and the timing of each number was on cue. Behind the smiles and the sparkling gowns is months, sometimes a lifetime of training in addition to the sharp direction contestants receive during rehearsals. fourpoints went behind the scenes Thursday afternoon to get a sneak peek of the evening’s program and (gasp!) some of the contestants in curlers.

“We wouldn’t be able to do shows without rehearsal,” says John Best, executive producer. “We’ve all been operating in our own worlds. This is where it all comes together to make sense.”

Throughout each night of award-winning, judges picked winners in areas of talent and evening gown and on-stage question. The common thread connecting scholarship recipients thus far has been an age-appropriateness reflected in each winner. Above all, the winner of Miss America’s Outstanding Teen 2013 will represent the organization nation-wide exemplifying grace, and confidence as a teen. 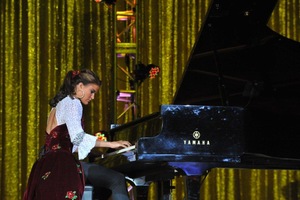 Two more teens have $500 in scholarships to their names after tonight. Miss Utah’s Outstanding Teen Jessica Richards won an additional scholarship, this time in talent, for her performance of “Pirates of the Caribbean Medley” on piano. Miss Connecticut’s Outstanding Teen Jaine Coann Lefebvre stood out to judges in her mermaid gown and her answer to a question regarding the necessity of penalties to drivers who text while driving. Jaine said drivers should absolutely be penalized for texting while driving because of the danger they put themselves and others in by doing so.

“They should get their license taken away,” Jaine said. “I don’t think it’s acceptable in anyway.”

Narrowed down from more than ten thousand contestants nation-wide, fifty-three young ladies performed before judges this week. On Saturday, just one will be chosen to give her service to the organization throughout 2013. Check back with fourpoints for the results!