The Miss America Organization has debuted the Miss America 90th Anniversary Doll to commemorate this very special anniversary of the beloved Pageant.  The specially commissioned dolls arrived in time for the 2011 Miss America Pageant, presented by DSW on Saturday, January 15, live from Planet Hollywood Resort & Casino in Las Vegas on ABC.  The dolls are a limited edition and each doll comes with the symbolic crown, in crystals, with a bouquet of red roses! 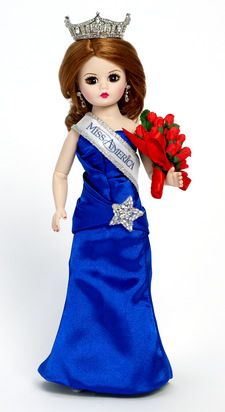 The Madame Alexander Doll Company was founded in 1923 with the dream of creating beautifully handcrafted play dolls for children. Madame Alexander's vision was founded on her unwavering belief that dolls should engage the imagination and contribute to a child's happiness and understanding of the world. The pageant began in 1921, so together these two companies continue to celebrate their history and their legacy to celebrate great American traditions.

Over the decades, great works of literature, the arts, and the different cultures of the world became the inspiration for Madame Alexander’s creations. Over the years, Madame Alexander initiated a series of "firsts" in the toy industry: 1930s - introduced the first dolls based on licensed characters from literature and the movies, including Alice in Wonderland, Little Women, and Gone with the Wind; 1944 - the first line of patriotic dolls to honor the U.S. Armed Forces bravely fighting in World War; and now for the first time, the Miss America doll!

The Miss America Organization is proud to partner with Madame Alexander to launch these treasured dolls.  The Dolls are available for purchase for $149 in the Merchandise Room at the Miss America Pageant while supplies last. For those not attending the Pageant, the Dolls can be purchased online by clicking here.