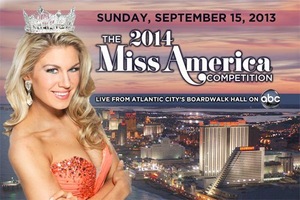 New Jersey Gov. Chris Christie welcomed back the world’s most famous scholarship competition for young women to its New Jersey birthplace, Atlantic City. Gov. Christie announced that the date for the beloved pageant is Sunday, September 15. The official announcement was made with the Miss America Organization, along with Casino Reinvestment Development Authority, the Atlantic City Alliance, and the Atlantic City Convention & Visitors Authority.

The Miss America pageant’s return to her home in Atlantic City, New Jersey, will be a thirteen-day event following Labor Day weekend and will include three nights of preliminary competitions taking place September 10, 11, and 12 at Boardwalk Hall. This historic return to Atlantic City will be a monumental event, complete with the much-anticipated Miss America "Show Us Your Shoes Parade" to be held on the famed Atlantic City Boardwalk, Saturday, September 14.

Sam Haskell, III, chairman of the board for the Miss America Organization, stated: “We are so excited to announce the date, and sincerely thank Gov. Chris Christie and the state of New Jersey and Atlantic City for their help in bringing Miss America home. We look forward to creating an incredible new era for our organization as we return to Atlantic City on September 15th, live on ABC! We are now looking forward to creating the most exciting television event ever for Miss America’s return home with the support of our network partner ABC. We know it will be a spectacular television event.”

“This September, we will be proud to showcase Atlantic City and Miss America together on network television. Miss America has evolved into a national pastime, and our organization enables over twelve thousand young women to participate in our scholarship program, each and every year. We know that the country will embrace our return to our birthplace and experience a new and very relevant Miss America,” stated Miss America’s President and CEO Art McMaster.

The Miss America Competition is the latest of several world-class events to come to New Jersey. New Jersey’s MetLife Stadium will host the National Football League’s Super Bowl XLVII, February 2, 2014. MetLife Stadium will also host WrestleMania XXIX on Sunday, April 7, 2013, and will include WrestleMania Week activities, such as WrestleMania Axxess, the 2013 WWE Hall of Fame Induction Ceremony, and Monday Night Raw. The 2012 season of NBC’s America’s Got Talent television show was held at and broadcast live from the New Jersey Performing Arts Center in Newark. New Jersey will host Formula 1 racing in Weehawken in June 2014, and the 2014 Special Olympics USA National Games will be held in Mercer County.