The Importance of Being First Runner-Up 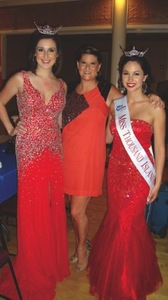 Titleholders know that to whom much is given, much is expected. Young women work to become representatives in their state for more than a résumé-builder or the chance to perform a talent onstage. For one year, the role is a job that requires time, passion, and commitment. But what often goes unnoticed is the importance of another role: first runner-up. Especially when the titleholder moves up the chain and the first runner-up is asked to step up to the plate, her presence and duty to the crown is essential to the continued success of the organization.

Amie Beth Shaver was first runner-up to Miss Alabama 1994 Heather Whitestone. Along with the other girls in the top ten, Amie Beth signed a contract that said if she was named first runner-up, and if the state titleholder won the national title, she would take on the role of state titleholder. When Heather was crowned Miss America a few months later, Amie Beth didn't hesitate to make good on her promise.

"My feelings were complete joy, and then disbelief," Amie Beth said. "I'd entered the hall in Atlantic City as Amie Beth, first runner-up, which was great! Then when I left, people were coming up to me saying, 'Miss Alabama!' It was very exciting."

Not every first runner-up has a story like Amie Beth’s. At times, the girls who are next in line for the crown finish out the year with the same title they held at the start. Even so, the impact of the role on their lives is still great. Jessica Bean was first runner-up to Miss Wyoming 2012. And although the current Miss Central Wyoming never took over for her state's Miss, she would have been ready if she were asked to do so. When Jessica was named first runner-up, she got the same "spiel" all Wyoming first runners-up get.

"They said if anything happens to the titleholder, I'm next in line," Jessica said. “I always need to be ready to step up to handle the responsibilities of the crown.”

In addition to keeping herself physically fit, Jessica made sure her platform and public speaking skills were also in shape. In fact, she says she was "out and about" promoting her platform and the Wyoming organization more as first runner-up than when she held other local titles.

The scholarships provided first runners-up could be just as important to the advancement of further education as the money won by the titleholder. For Amie Beth, the scholarships she put to use made a huge difference for her family. "I remember my dad pulling me into his office and saying ‘thank you so much for getting that scholarship money.’ He showed me how I was able to use it, and it was really humbling to do that."

Even if they are not the ones to do the final walk across the stage, flowers in-hand and crown on their head, the duty of the first runners-up is just as vital.