The Kind of Students Colleges Want 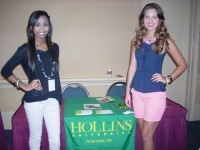 Attending college may be the norm, but organizations like Miss America and Miss America’s Outstanding Teen are working to make sure debt doesn’t come standard with a degree. Thankfully, many colleges and universities across the country are ready to provide in-kind scholarships to national contestants and titleholders.

Many MAOTeen contestants are on the verge of commencing the college experience, and after the 2013 competition, award winners are stepping a little lighter knowing college expenses will be less of a burden. Miss Rhode Island’s Outstanding Teen Heather Shen was awarded $3,000 in combined cash scholarships, in addition to four-year renewable, full-tuition scholarships to Auburn University, Hollins University, and Troy University. Heather said she understands the gravity of college loans; she has an older sister. But now, she can help her parents and her education. “I know how expensive it can be,” Heather said, “and to be offered so much is heart-warming to me.”

Many former titleholders are already reaping the benefits of in-kind scholarships, and they returned to MAOTeen 2013 to tell the tale. Miss Ohio’s Outstanding Teen 2010 Cecili Weber attends Hollins University—where full tuition, half tuition, and $25,000 scholarships were awarded to MAOTeen contestants this year. The university appealed to Cecili because of its high rate of graduates finding jobs soon after graduation. The monetary incentive played a big role, too.

For former teens like Miss Viriginia's Outstanding Teen 2012 Andolyn Medina, scholarships are a chance to give parents recognition and thanks for the support they provided through the pageant journey. "When I was told about scholarships at Hollins, I thought, here's finally my chance to pay my parents back for everything they've put in for me to be a part of this organization," Andolyn said. “Everyone wants to graduate debt-free, and because of MAOTeen and Hollins, I’ll be able to.”

The benefit of in-kind scholarships isn’t just for award recipients. Universities are also at an advantage with MAO and MAOTeen contestants among the student body. “These girls are the best of all the students in the United States,” said Brenda Campbell, Troy University director of graduate studies. “These are the kind of students we want.” MAOTeen builds a program that expects a high caliber of young women, and colleges recognize that and respond by allotting scholarship dollars. MAOTeen invites new colleges to take part in their annual college fair, or to attend pageant competitions so they can see for themselves the level of maturity, academic excellence, and community service contestants are capable of. After that, it doesn’t take much convincing.

There are indeed many opportunities to advance academically. And with the help of MAO and MAOTeen, more young women can go to college and graduate without so much debt. Still, no matter the cost, education is the most valuable asset for young women to have. “No one can take your education away,” Brenda said. “Wealth may come and go, but academics is everything.”