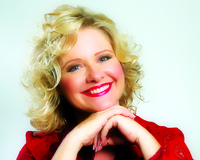 I had made name for myself as a performer during my tenure as Miss South Carolina. After giving up my title I continued to receive calls from churches, conferences, and other events requesting that I come sing or speak. In 1987 I was asked to sing for Pope John Paul II when he visited South Carolina. I also appeared on the 700 Club, and many other national TV and radio programs. My singing career began with the Miss American Program and has continued for the last twenty-six years. I work between seventy-five and one hundred events annually across the country, have written/published two books, and recorded twelve CDs. I have been a single mother for the last fourteen years to two wonderful children. My daughter is a sophomore at Clemson University and released her own debut CD “Shine” in 2010. My son is an amazing guitarist and junior in high school.

As a titleholder, you are always seen as the reigning state ambassador, a role model to many, and must carry yourself well at all times. That is something I take to heart in life now, whether I am performing at an event or simply in the grocery store. I realized that once given the charge of being a role model, you consider every interaction as an opportunity to make a positive difference in someone’s life. As the Miss America Program is all about empowering women, twenty-six years after being a participant, I can whole-heartedly attest to the fact that the experience did just that. Learning to be a public speaker, performer, and state representative helped me become the woman that I am today.

In fact, I still support Miss South Carolina. Every year my children and I attend the pageant, as it has become a traditional part of our summer vacation that we look forward to every year—especially my 15-year-old son.

My life motto/Scripture is Proverbs 3:5–6, which says, "Trust in the Lord with all of your heart, lean not on your own understanding. In all your ways acknowledge Him, and He will direct your paths."  I choose to live my life on purpose and challenge others to do the same. The happiest of people don't necessarily have the best of everything, they just make the most of everything that comes along their way. I was not Miss America, but I was given the amazing honor of being Miss South Carolina 1986, which opened a vast amount of doors for me to walk through as I continue this journey which is the life God has entrusted me to live to the very fullest.