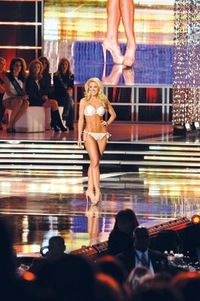 In addition to attending the live competition, the grand prize winner and a guest will receive a three-night stay at the Revel Casino Hotel in Atlantic City, New Jersey, complimentary Catalina swimwear, and a spa treatment at Revel. Miss America 2013 Mallory Hagan will also meet the winner as she helps celebrate the return of the Miss America Competition to Atlantic City.

Second and third prizes for the sweepstakes include complimentary Catalina swimwear and American Express gift cards valued at $200 and $100, to be used anywhere.

The Miss America by Catalina Collection launched in January 2013 at Walmart, following the return of Catalina as the official swimsuit sponsor of the 2013 Miss America Competition.