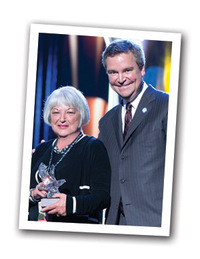 fourpoints magazine recently sat down with 2014 Academy of Honor winner Shelley Taylor, executive director of the Miss Michigan organization. Get her reaction to the award and her secret to more than thirty successful years of volunteering within the Miss America Organization in the December issue of fourpoints! Until then, here's a little recap courtesy of MAO.

Shelley was presented with the prestigious Waterford crystal eagle during the Wednesday evening preliminary competition on stage in the iconic Boardwalk Hall by CEO and Chairman of the Board Sam Haskell, III. "Shelley's years of volunteering began in the mid- 1970s and today, she is the heartbeat of the Miss Michigan Organization. She instills the values and the importance of community service in her contestants and we are proud to salute her achievements," Sam said.