David White and Jan Mitchell are former Texas local pageant executive directors. They’ve been “in the trenches,” as Jan calls it, and they want to make sure those who are currently laboring there know the state board is available to lend a hand. “We’re not asking them to do anything we haven’t done ourselves,” Jan said.

Because the co-EDs understand the trials and tribulations of fundraising, recruiting, and coordinating the details of a local pageant, they’re building on a strong existing foundation to put programs and processes together to create cohesiveness throughout state organizations.

Open communication inspires local involvement in Texas pageants. Because David, Jan, and members of the state board enthusiastically tout the benefits of the organization, they’re stirring up the dust among potential volunteers and future local EDs. Genuine appreciation from the Texas board proves to volunteers that they are needed and essential. “Volunteers are a part of our leadership team,” Jan said, adding that “local executive directors are the most important.”

It all begins with teamwork, which is the beginning, middle, and end of success in Texas. David said his partnership with Jan is one of the best parts of his role, because they are able to work side-by-side and take new, creative ideas and make them better. “We put our ideas to work,” he said. 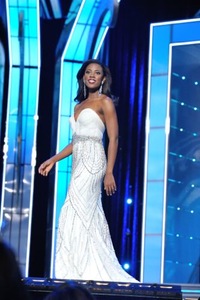 They also put their state titleholder to work promoting the organization, even in the least expected places. During her more than four hundred appearances this year, Miss Texas 2013 Ivana Hall will spread the message of the many benefits the Miss Texas Pageant, Inc. affords its participants, titleholders and contestants alike. “Texas is so diverse, and we meet a lot of different people with different backgrounds and races. We get to mix and mingle with everyone, and living in Dallas has helped prepare me to be able to adapt quickly,” she said.

No matter the rank of participation—whether someone is just interested in building sets or if they want to start up a local pageant—there is a place for them with the Miss Texas Pageant. Together, David, Jan, and each member of the organization family are working and growing a statewide legacy rooted in tradition that promises Texas-sized success.

Read more about the Miss Texas Pageant in the October 2013 issue of fourpoints!