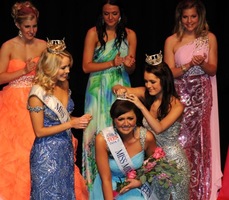 Miss Minnesota's Outstanding Teen Bailey Wachholz's motto is never give up when it comes to pageants and her platform. Crowned in March, Bailey tried four times before she won the title, but she was not discouraged. Now she is marching onward in her year of service to bring awareness to Alzheimer's disease.

"A couple months before my first pageant, Miss Minnesota's Outstanding Teen 2009, my father was diagnosed with early stage Alzheimer's disease. Being so young, I didn't know anything about the disease and had no idea it could happen to a parent. From there I knew that I needed to compete," Bailey says.

Bailey was thirteen at the time. Her platform, "Remember Me? Alzheimer's Through the Eyes of a Child," has three focuses, to educate, to advocate, and to support, Bailey says.

"At first my platform was just a platform for a pageant, but now it's my life."

Bailey visits students of all ages. She developed Minnesota's first education program for college students to learn about Alzheimer's disease. She advocates at the state level before the Minnesota's Senate and House of Representatives for research funding.

"Alzheimer's is the most under-funded disease of the top ten diseases that kill people in America," she says.

At the heart of her platform is a girl who has experienced the effects of Alzheimer's first hand, and because of that, she works with others who have loved ones suffering from the disease.

"I support through facilitating the only support group in Minnesota for young adults and children that are affected by Alzheimer's disease specifically," she says.

Bailey is seventeen years old, and she aspires to become a broadcast journalist.