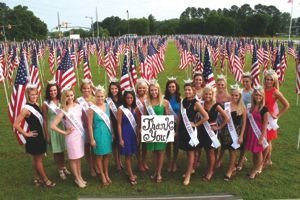 The Miss North Carolina Pageant is celebrating its seventy-fifth anniversary this year, and, yes, there is a secret (or two, or more) to its success. This year, the pageant will be televised again for the first time since 1997, and the planned six-month exhibit at the NC Museum of History, the Gala being planned by the North Carolina Sisterhood of Former Miss North Carolinas, and the generous support of many corporate sponsors will all ensure that the program is poised to return to prominence and prestige in the state.

Last year, the pageant was supported by the Papa John’s organization with a donation of more than $54,000. This donation was made through the efforts of a former board member who works for Papa John’s and organized a coupon fundraiser where customers could order a pizza and use a MISSNC coded coupon that donated one dollar from each pizza ordered to the scholarship fund.

Fundraisers within the organization include the annual golf tournament, a silent gift basket auction held during pageant week, the Carolina Princess program, and the development of the youth program, the North Carolina’s Outstanding Little Miss Pageant.

Coupling fundraising with organizations that allow past, present, and future Miss North Carolinas to come together to support and help each other are just a few of the state’s secrets to success. Read more about the pageant in its seventy-fifth year by subscribing to fourpoints!