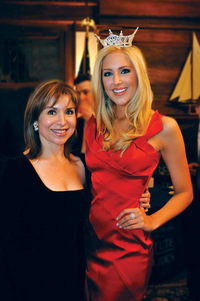 The stakes are high in Washington, D.C., as are the expectations for professionalism at a level standing as resolute as the pillars of the Capitol. There’s no time to ease into a year of service for titleholders representing the nation's capital, and if the Miss District of Columbia Scholarship Organization Executive Director Teri Galvez has anything to do with it, her young women will be ready.

This year, Teri celebrates her tenth year as executive director in Washington, D.C., where the state organization has existed for sixty years. And 2013 marks another anniversary: thirty years since Teri was a contestant in the Miss California organization's competition. Because her year of service stretches three decades, Teri knows what it takes to maintain a functioning, efficient volunteer organization. It’s a knowledge base she’s built up since her days on the pageant stage.

Teri believes Washington, D.C., is America’s most educated city, and it’s a “no brainer” to help young women living there obtain scholarships and further the spread of knowledge. "People are smart, prepared, and educated; that's what this city is about," she said. “That, and politics.”

Even so, the Miss America Organization fills a need. "One thing we do lack is polish," Teri said of society today. Finishing schools are things of the past, but proper etiquette is not—and that's where MAO comes in. "In D.C., you're always called upon to do a presentation of some sort. It's is so incredibly necessary for young women to have personalized professional development."

Teri knows that every titleholder is different: Each sees her year of service with different eyes, and different goals and opportunities. That works for Teri. “You can give advice to young ladies, and they can choose to take it. If not, I’m OK with that, too.” And it helps that the rest of the board supports this approach. Teamwork extends the life of a legacy, and after Teri passes the torch, she’s hopeful that the work she’s done will continue on and only get better.

Read more about the Miss District of Columbia Scholarship Organization in the August 2013 issue of fourpoints!