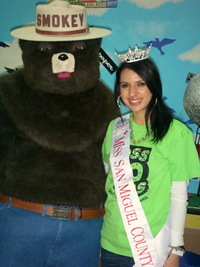 DeAnna was crowned on December 3, 2011 after years of service and participation in the Miss America Organization. The previous Miss Roswell (crowned January 29, 2011) placed in the Top 10 in the Miss New Mexico Pageant in June 2011. She has received President Obama’s award for outstanding community service for founding the “Teens Go Green” recycling program in 2010. She met with New Mexico Governor Susana Martinez and area legislators to talk  about renewable energy and resources. DeAnna recently finished writing a children’s book entitled “EuroDog Saves the Planet” and hands out seed packets to encourage planting among young people. She prides herself on beautification (i.e. recycling). She wants to give the slogan “natural beauty” a whole new meaning to include our natural surroundings.

Throughout the months of March, April, and May, an anticipated twelve hundred Keep America Beautiful affiliates and participating organizations will bring together an estimated 3.8 million volunteers to produce more vibrant, beautiful, cleaner, and safer towns and cities. DeAnna is proud that her platform of environmental stewardship is getting the recognition it so richly deserves.

“Service to the community is the ultimate demonstration that you love where you live,” said Matthew McKenna, president and CEO of Keep America Beautiful. “Participating in the Great American Cleanup can become a foundation for uniting friends, family, neighbors and communities in activities that don’t just make your community aesthetically pleasing, but also make it more effective at overcoming challenges.”

DeAnna, 18, will continue on her path of environmental service while she competes in future Miss America pageants. She is looking forward to the Mis New Mexico Pageant this June. DeAnna is studying public relations and elementary education.