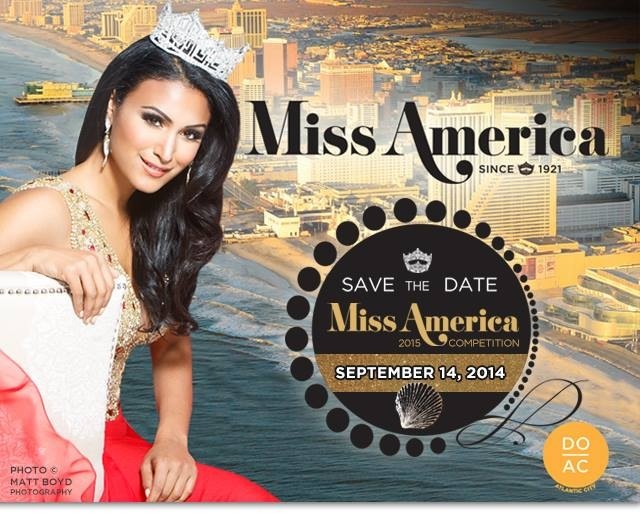 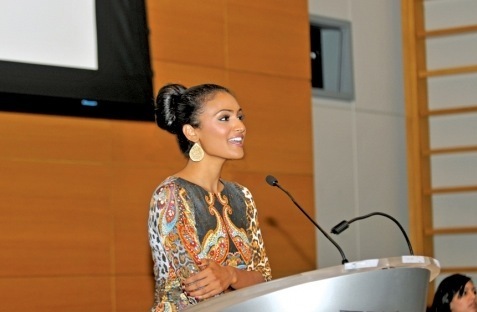 Miss America 2014 Nina Davuluri had the distinct honor yesterday morning of sitting on the panel of discussion at the White House Forum on Minorities in Energy Initiative. Nina came together with representatives from community organizations, academia, business, and industry to provide their individual perspectives on shared challenges in the areas of energy economic development, STEM education, and climate change. Not only was this event a perfect forum to discuss The Miss America Organization's position on STEM education in the classroom, but it also sheds light upon diversity in these areas. 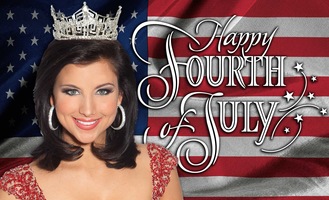 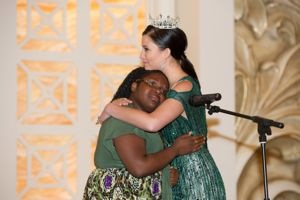 The foundation, in its fourteenth year, honors and celebrates individuals, groups, and corporations that work on behalf of others who face the daily and lifelong challenges of mental illness and substance abuse. Other honorees in attendance at the event include David L. Ganz, Bergen Country Freeholder, and HOMECorp of Montclair, New Jersey.

Source and photo: MAO Photo: Laura Kaeppeler embraces Samira Chapman, a 13-year-old client of the Care Plus Foundation, after they sang "One Moment in Time" together on stage. 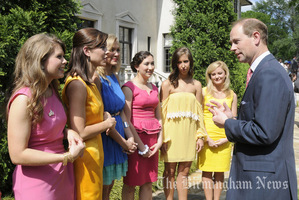 Miss America 2012 also attended the Duke of Edinburgh-Royal Gala the evening of the awards ceremony. The gala is an organization fundraiser. Laura and other state title holders performed at the event and welcomed Miss America 2005 Deidre Downs Gunn.

Watch a video slideshow of the events on the fourpoints homepage!

Miss America Laura Kaeppeler is in New York today kicking off the 2012 Great American Cleanup. Laura will take the stage in Military Square with members of the Keep America Beautiful organization and other city officials. The group will recognize National Volunteer Week and encourage the entire city to focus on environmental cleanliness and sustainability through recycling and volunteering.

There are more than thirty thousand community improvement events throughout the United States made possible by millions of volunteers. Today's event will put these workers in the spotlight and celebration their dedication to keeping the earth clean and green.

Laura will sing the National Anthem tonight at Yankees Stadium. Tune in to your local station to see her and the game! It will air on YES Network and MLB Network. 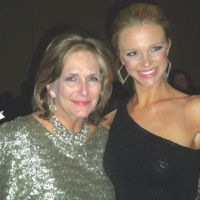 Get Ready for Summer and the Stage with Spray Tanning 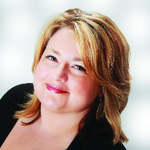 Spray tanning and its many facets is a wonderful way to give your skin a healthy glow while avoiding the harmful UV radiation in tanning beds. Kelly Richardson, president of Be Bronze, thinks so too, in fact, she sat down with fourpoints to give us (and you!) the scoop on spray tanning know-how.

How you look onstage is the end result of months of training and preparation for your pageant. Unfortunately, the harsh lights of the stage "wash out" everyone's skin tone, and highlight flaws, scars, and imperfections. Getting a spray tan as part of your pageant prep will not only even out your skin tone, but will also make your skin look tan and healthy when you are in the spotlight. An added bonus: getting a spray tan make you look as if you lost ten pounds, and most professional spray tanning products have caffeine, which temporarily constricts the skin, making it appear firmer.

If you are doing a local pageant, definitely get your spray tan a day or two before the pageant. Make sure you wax/shave beforehand and that you get your tan AFTER your manicure, pedicure, massage, or any other spa treatment that might possibly exfoliate the skin. State pageants are usually a week in length and usually the spray tan you get pre-pageant is not going to last the entire time. Most of the girls we work with get spray tanned the evening before swimsuit/physical fitness and then again before the final night.

Not even the best spray tanners can spray themselves at home. You will always need help with your back. There are many great at-home tanning systems made by professional companies that are lower in cost than a salon/pro system. Another option is an aerosol mist, which many contestants used this year at Miss America. Whether or not you are getting a professional tan, or getting one done at home, there is a lot you can do to ensure you get an even tan.

The first and most important thing is to make sure your skin is not wet. A lot of us jump in the shower before we get sprayed or apply a self-tanner. Having skin that is still moist can cause a spray tan or self-tanning lotion to run on our skin and will result in streaks.

Make sure you have exfoliated with a "water based" body polish or scrub.

Lastly, make sure that you shave or wax before your spray tan. Doing this afterward actually removed the layer of skin that has been tanned, and can create splotchiness.

To read more tips and tricks to spray tanning, subscribe to fourpoints!

Local Miss Cracks Down on Cyberbullying 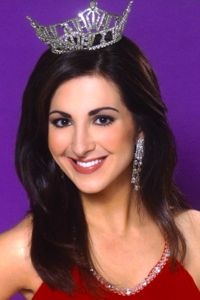 More than 70 percent of students play a role in cyberbullying, whether they be the bully, the victim or a witness, according to the National Center for Education Statistics. For Miss West Central Ohio, Elissa McCracken, the number is too high, and she is using her platform to fight it.

Elissa was a victim of cyberbullying in middle school, an experience that shook her confidence and made her doubt her ability to compete in pageants. But now that she has overcome the terrors of cyberbullying, she is promoting her platform throughout her home state.

"I have devoted myself to the commitment that I would help others avoid the intimidation, humiliation, and embarrassment that I endured," Elissa said.

Elissa is traveling throughout Ohio to promote her platform and attend cyberbullying workshops. At a recent event, she addressed educators, mental health professionals, and law enforcement personnel. The event was called "Cyberbullying 101," and was sponsored by the Ohio Attorney General, Mike DeWine.

"Several attendees requested my contact information, and I am very excited about the possibilities such networking can provide me for spreading my important message to help other young people," Elissa said.

Elissa's platform, "Stop Cyberbullying," is being received by a wider audience thanks to her public service announcements. She recorded the announcements for the Attorney General's Office, and they will be broadcast, one on radio, and one on television, throughout the state.

Elissa is in her third year of pharmacy school at Ohio Northern University. She plans to continue spreading the message of anit-cyberbullying in the near future and for years to come.

"I plan on attending the conferences and workshops to which I was invited, participate in webinars devoted to continued education about safety online, and continue my diligent pursuit of spread the important message of my anit-cyberbullying platform message," Elissa said.